In former times the quay was constructed so that working sailing barges could tie up as close as possible to the tidal channel leading up to Kingsbridge. The current owners make use of two running moorings from the property and the opportunity to apply for and reinstate these moorings is available on contacting Salcombe Harbour Authority.

The estuary leading between Kingsbridge and Salcombe is well known and needs little introduction. As well as its natural beauty it provides safe boating and sailing on sheltered inland tidal waters with a maze of creeks and inlets waiting to be explored. Additionally those with seagoing boats can experience the thrill of going to sea and enjoy the vistas of many of the highest cliffs along the South Devon coastline. Salcombe, with its chandlery and boating outlets and well known sandy beaches and coves is readily accessible by water.

Within half a mile along a near level walk is the Town Square of Kingsbridge which leads directly to the main shopping street and to restaurants and public houses, commercial facilities and clubs and societies for all ages including a Sports Centre and Swimming Pool. Kingsbridge Community College is within walking distance of the property. Kingsbridge has the usual health facilities and two supermarkets. There are three golf courses within ten miles and the long distance coastal path is at its nearest point some five miles distant. Dartmoor is twelve miles away as also is the A38 Devon Expressway and the mainline train station at Totnes.

Believed to have been built in 1823 with later extensions the prominent waterfront town residence is mainly of traditional stone construction under manmade slate and flat roofs. Original sash windows afford extensive water views over the garden and estuary taking in the comings and goings of a captivating waterway. The grand waterfront accommodation of white render over stone with ornamental louvred shutters comprises:- 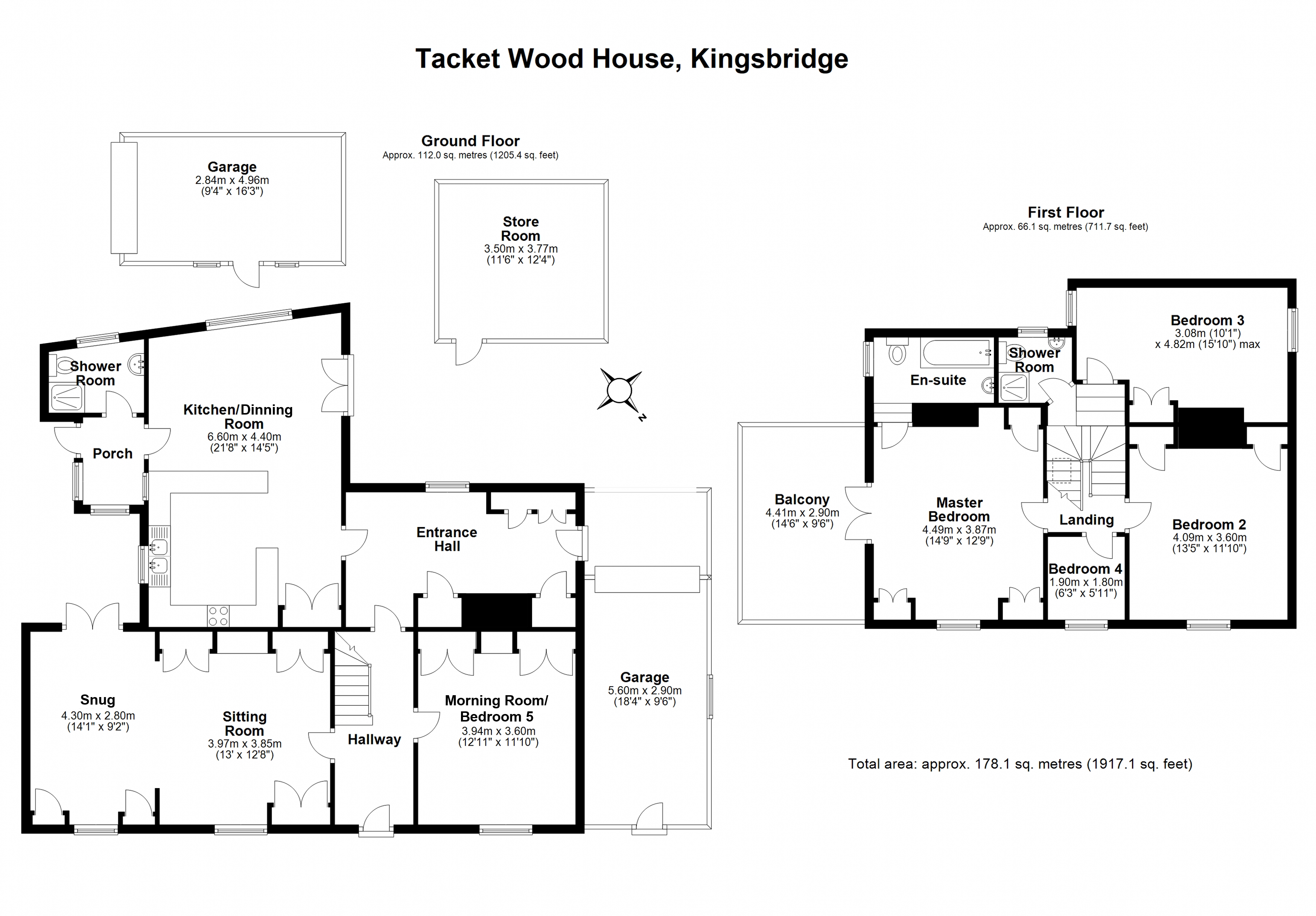 Open all room descriptions Close all

08.27m x 06.65m (27' 2" x 21' 10") with the ability to divide into two rooms with a drawn curtain to create a snug or garden room if necessary, triple aspect to include shuttered floor to ceiling single glazed sash window with water views over front garden to estuary and beyond, shuttered single glazed sash window with window seat and cupboard under with water views, double doors single glazed to walled courtyard, ornate arched built in shelving and cupboards under to both alcoves of chimney breast, marble fireplace and hearth housing a wood burning stove, further built in floor to ceiling cupboards, TV point, two newly installed Fischer Electric heaters.

03.94m x 3.60m (12' 11" x 11' 10") option to use as a ground floor bedroom or dining/morning room, shuttered floor to ceiling single glazed sash window affording views over front garden to estuary beyond, original stone fireplace and hearth which could accommodate a wood burning stove, arched built in shelving and cupboards under to both alcoves of chimney breast, cornicing.

Stone walled boundary to the property with paved entrance to car port fronting the Attached Garage with newly installed roller door, high roof, power points and door to the front garden, from here the secondary entrance to the house is reached. The south westerly facing walled courtyard is the smaller of the two opening off the Kitchen/Breakfast Room and is paved with bordered beds to either side with space for a central water feature. A second larger slate tiled courtyard south easterly facing is reached from the Back Entrance Porch and houses a large attached greenhouse, outside tap and two ornamental pillars with a gate in the walled boundary to the private road. Crossing the road via this exit is an additional detached garage and store room with a parking space alongside. The southerly facing enclosed side garden reached from the courtyard offers a private and sheltered area of lawn with stone wall bordered flower beds and raised vegetable patch. A paved path leads to a timber summer house, beyond which is a paved viewing patio affording far reaching estuary views over the tidal estuary. Following the line of an established hedge part dividing the two good sized gardens the waterfront garden is reached, mainly laid to lawn with mature shrubs and a Macrocarpa tree with TPO, gated stone wall boundary to a strip of grass on the estuary side, paved patio area to the front of the house. A side gate leads to the foreshore which is owned above the average high water mark. Moorings off the property are available subject to the Harbour Master’s consent.

Heading towards Salcombe leaving Kingsbridge take the left hand turning directly after the Co-op petrol station along Rope Walk, take the first left hand turning after the creek to your left, into Tacket Wood, the property is the last house along this private road, with a turning circle and parking alongside the detached garage and store opposite the property.

An exceptional opportunity has come to the market for the keen yacht or boating enthusiast to acquire a period property with water frontage and private quay and foreshore mooring on application to the Harbour Office, beside the tidal waters at the head of the Salcombe and Kingsbridge estuary. The property is situated at the end of a private lane and boasts a delightful waterfront garden overlooking the estuary to the front and a private sheltered garden to the side of the property, featuring a commanding viewing platform looking up and down the estuary. This charming five bedroom town residence offers a wealth of historic features having started life as the local quarry master’s prestigious home.

Enquire about this property

For Sale
Add to shortlist

For Sale
Add to shortlist

What’s my property worth?

Get an accurate indication of the current sale or rental value of your south Devon home. Our property professionals will offer an honest market price from our unrivalled knowledge of the local property scene.

Free Valuation
Close
Covid-19We remain busy and open for business, so please do not hesitate to contact us should you have any questions or queries.Read more
Close bulletin
We use cookies to ensure that we give you the best experience on our website.We use cookies.Find out more